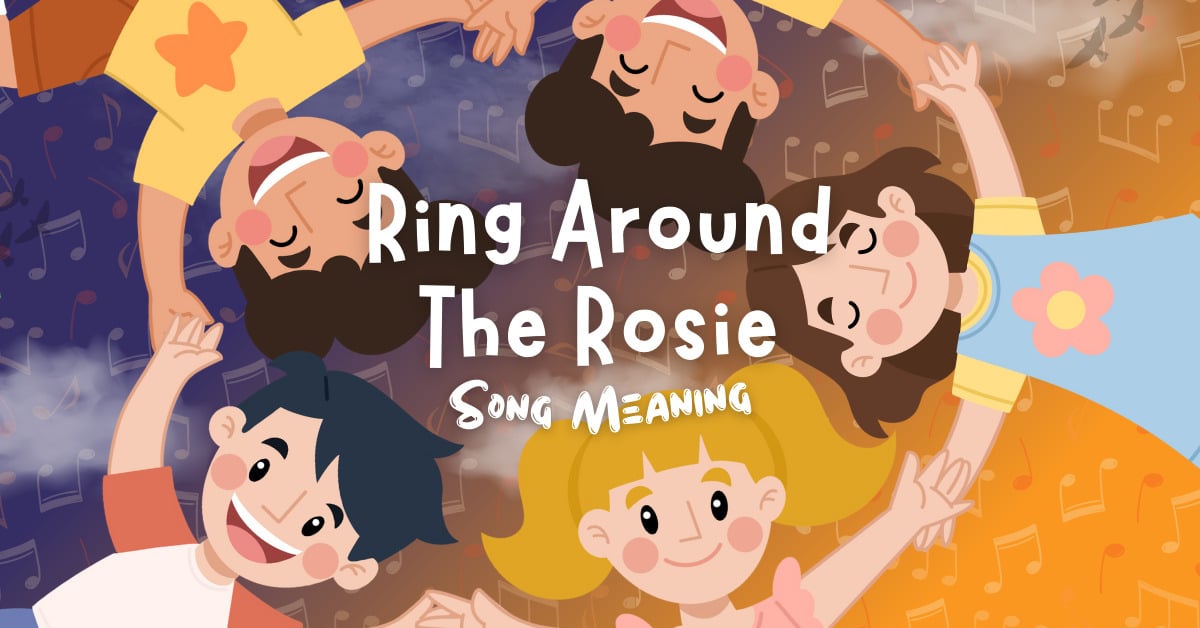 Children today grow up singing Ring Around The Rosie, often with an accompanying dance or game. The song has become a popular nursery rhyme both at home and on playgrounds. It first appeared in print in the mid-19th century, though earlier versions may have existed as long ago as the 1790s.  The legend has long persisted that this innocent children’s rhyme actually has some dark origins and is actually a veiled metaphor for the Black Plague. But what is the real meaning of Ring Around The Rosie, and where did it come from?

History of Ring Around The Rosie

The earliest records of the song appear in print in the 1880s, the first being Kate Greenaway’s 1881 Mother Goose, Or The Old Nursery Rhymes. Two separate versions appeared in 1883 in the publications Shropshire Folk-Lore: A Sheaf of Gleanings and by William Wells Newell. These early publications seem to contradict the theory that the song has roots in the Black Plague outbreaks of the 1300s. Most historians think that if the song really did date back to the 14th century, some version would have appeared in writing earlier than the 1880s. Newell himself claimed that the song had been in existence since the 1700s, but there is no evidence of this—at least not an English version. Earlier versions might have existed in Germany, Switzerland, or Italy (and are still sung by children in those countries to this day), but Greenaway’s version is the first evidence of translations into English. The earliest recording of the song comes from the United States in the 1930s. It comes from a group of schoolgirls in Wiergate, Texas, in 1939.

Ring Around The Rosie Today And Variants

The lyrics of the song are simple, making them easy for children to learn and sing. The modern version goes: “Ring around the rosie
A pocket full of posies
Ashes, ashes, we all fall down.” The lyrics are often sung as an accompaniment to a group game. Children hold hands and walk or skip in a circle while singing. Then, at the last line, they release their hands and fall down on the ground.  Other variations of the game include one child standing in the middle of the circle as the “Rosie” (rose tree, coming from the French word rosier). When the other children fall (or squat or bow, at the end of the song), the last one to comply loses and becomes the “Rosie” for the next round.  The lyrics have many variations, though all versions of the nursery rhyme include the same first few lines (or very similar ones). In Britain, children usually replace the third line with the word “A-tishoo.” Other recorded versions have included the lines “Red bird, blue bird,” “Green grass, yellow grass,” or “Sweet bread, rye bread, Squat!” A later version in America in the 1930s included the lyrics: “Ring around a rosey
Pocketful o’ posies
Light bread, sweet bread, squat!
Guess who she told me, tralalalala
Mr. Red was her lover, tralalalala
If you love him, hug him
If you hate him, stomp!” Not all the versions involve falling down. Some, like the one mentioned above, command the players to squat at the end or to pretend to sneeze (with the lyrics “A-tishoo”). Other less friendly versions involve a male player trying to force a kiss on a female player.

There have been many suggested meanings for the lyrics to the song. Few have some backing from historians while others are largely a matter of urban legend.

An urban legend has long claimed that the song is an elaborate metaphor for the plague. This claim adds a macabre background to the lyrics, saying that “ring around the rosie” refers to the hallmark spots found on plague victims, which appear as a red spot surrounded by a ring. The legend also claims that “a pocket full of posies” refers to flowers stuffed in the pockets of the dead, either as a way of honoring them or as a superstition to keep the plague from spreading to the living.  “Ashes, ashes” is said to refer to the act of cremating bodies, which was considered safer than burying them. But they still did bury them, even stacking them five deep. Meanwhile “We all fall down” is supposedly a reference to the inevitability of death.  While the plague explanation is told on every playground to spook children, there actually isn’t a lot of evidence to support it. In fact, the connection of Ring Around The Rosie with the plague didn’t arise until after the Second World War and didn’t appear in print until the 1960s.

Some accounts say that the words “ring around the rosie” refer to a rosary, prayer beads used in Catholicism, and some other Christian denominations. Rosaries are heavily tied with floral imagery and designed in a single loop of beads, which may account for the lyrics “ring o’ roses” in some variations. However, this is just another theory and hasn’t been substantiated by official records.

Other historians theorize that the song might have something to do with the ban on dancing in the earlier centuries, which existed in Protestant circles in both Britain and the United States. With dancing forbidden, musical games arose as a loophole. The lyrics “ashes, ashes” may have actually come from “husha, husha” or another similar phrase, warning the other players to fall silent. Of all the theories that exist, most historians seem to agree that this is the most likely explanation—if there actually is any deeper meaning to the lyrics at all.

What Do The Lyrics Mean?

Unfortunately, there is no truly satisfactory explanation for the meaning of the lyrics to Ring Around The Rosie. The simple truth is that we don’t know. Ultimately, most historians seem to think that the lyrics are simple nonsense, like many other nursery rhymes.  While this might seem frustrating, it is worth it to note that Ring Around The Rosie became popular during a time when many other nonsense children’s songs were spreading. These include rhymes that are popular to this day, such as Humpty Dumpty, A-Tisket, A-Tasket, and Hey Diddle Diddle.  Most historians ascribe to the theory that Ring Around The Rosie was a simple children’s party game. The “ring” was the ring of children dancing together, with the final lyrics issuing a silly command that would cause the circle to break up, such as “squat,” “curtsy,” “fall down,” or “sneeze.”

So Where Did The Urban Legends Come From?

If there is no deeper meaning behind the Ring Around The Rosie lyrics, where did all these urban legends come from? The truth is that nursery rhymes are particularly susceptible to this phenomenon. Songs for children, especially ones with nonsensical lyrics, are often searched for secret meanings; however, more often than not, they are simply silly songs with no deeper meaning.  Ring Around The Rosie might not be as interesting as a gruesome song about the Black Plague, but it remains one of the most popular and enduring nursery rhymes of all time.  We think this video provides good context for further viewing. Read Next: The meaning of “Pumped up Kicks” by Foster The People The meaning of Don McClean’s “American Pie” song lyrics The staff behind Music Grotto create thorough editorial pieces from our relationships with media/music journalists and writers all over the world. We directly publish pieces written and researched by accomplished writers and our adherence to strict editorial processes ensures quality opinions and facts are expressed in all of our featured pieces.