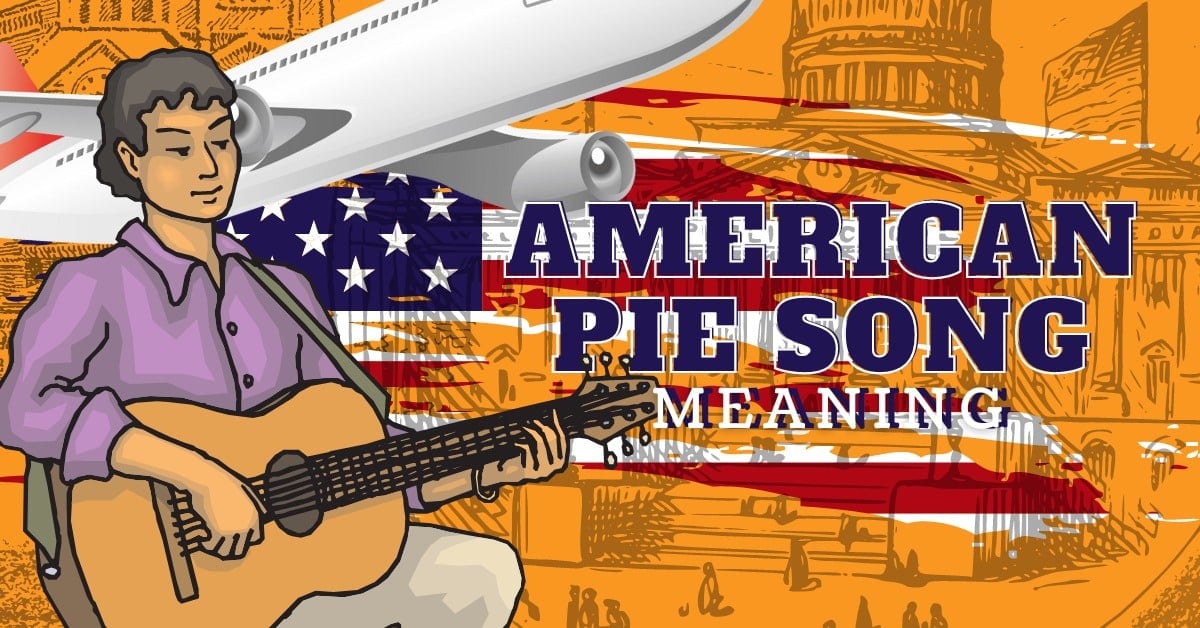 One of those songs that almost everybody knows instinctively no matter their age, “American Pie” by Don McLean is an absolute classic. Because the song checks in at over eight minutes long and has been around for more than half a century, there has been a lot of speculation over every line in the song. For many years, the only line that McLean thoroughly explained was “the day the music died.” It became common knowledge that the line was in reference to the death of some of the most prominent musicians of the time when McLean was growing up. On February 3, 1959, an airplane carrying Buddy Holly, J.P. Richardson (a.k.a The Big Bopper), and Ritchie Valens crashed in Iowa, signaling the proverbial end of a music era. As for the rest of the lines, there were plenty of references, but McLean refused to reveal what the “American Pie” song’s meaning was specifically. He even alluded to Carly Simon not revealing the subject of “You’re So Vain,” so he felt that he didn’t have to reveal the deeper meaning behind “American Pie” either. It wasn’t until 2015 that the world started to get an idea, as McLean had sold the original composition and the 16 pages worth of songwriter notes to the tune for a whopping $1.2 million in an auction. With more knowledge of “American Pie” collected over the years, we can begin to decipher what the lyrics mean. Here’s a full explanation of the song, section by section:

“A long, long time ago, I can still remember, How that music used to make me smile, And I knew if I had my chance, That I could make those people dance, And maybe they’d be happy for a while.” Right from the beginning, McLean refers to his childhood, thinking about the times when he would listen to the likes of Buddy Holly. He also lays out his career aspirations of being a popular musician. He then mentions delivering newspapers on that fateful February day after the plane crash took place, finding out the bad news.  “Bad news on the doorstep, I couldn’t take one more step, I can’t remember if I cried.” At the time, Buddy Holly’s wife was pregnant. McLean can’t remember whether or not he cried upon reading the story. One thing is for certain, though: the tragic day had a huge impact on him and his music.

“So bye-bye, Miss American Pie, Drove my Chevy to the levee, but the levee was dry.” Apple pie is synonymous with Americana, so saying goodbye to “Miss American Pie” is symbolic of a generation passing the torch. As for the levee being dry, that line can be a bit confusing if you don’t know McLean’s backstory. He was a regular at a bar called The Levee in New York where he and his friends would have their fill of drinking. The “levee was dry” means that there were no more adult beverages being served.  The chorus caps off with the line “this’ll be the day that I die,” which is a line taken from a Buddy Holly song, though it was changed every so slightly from “that’ll” to “this’ll.” The full Holly song refers to his life metaphorically ending in regards to lost love, giving it its own meaning in “American Pie.”

“Did you write the book of love, And do you have faith in God above, If the Bible tells you so?” The first line in this verse is one of the most commonly misinterpreted, with many believing that there’s a deeper meaning. Instead, McLean is referencing a couple of songs from his favorite era of music. The Monotones came out with “The Book Of Love” while Don Cornell released “The Bible Tells Me So.” The rest of the verse details McLean trying to win the affection of the proverbial ‘Miss American Pie,’ continuing to make 1950s song references. High school dances being held in gymnasiums were wildly popular back then (and still are today). It was a much simpler time long before social media and expanded cable, and even before the Vietnam War. It was a time of innocence for McLean, and Miss American Pie leaving him signaled the end of that era.

“Now, for ten years we’ve been on our own, And moss grows fat on a rollin’ stone.” With the release of this song in 1971, McLean likely began writing in 1969. That would mark a decade since the Buddy Holly plane crash, hence the line about people being on their own for ten years. From here, things get very complicated lyrically as there can be a lot of different meanings. McLean also alludes to “rolling stone,” which was used a lot in that era, from magazine to song, and the name one of the most popular bands of all time. “Oh, and while the king was looking down, The jester stole his thorny crown, The courtroom was adjourned, No verdict was returned.” The most popular theory is that this verse refers to Bob Dylan’s music changing drastically and going into hiding during this decade. That’s because it’s widely accepted that when referring to ‘The Jester,’ McLean was talking about Dylan. After all, Dylan was wearing a James Dean jacket on one of his album covers. But who are the king and queen that the jester played for, though, with Dylan stealing the proverbial crown? While musically the king and queen could be Pete Seeger and Joan Baez, some have said it refers to the Kennedys, with John F. Kennedy’s assassin Lee Harvey Oswald being the jester in this scenario. “And while Lennon read a book on Marx, The quartet practiced in the park.” It was obvious that McLean was referring to John Lennon, but the Marx allusion remains a mystery. “The quartet” is The Beatles, launching a new era of music that the “American Pie” singer would have to be dragged into kicking and screaming.

“Helter skelter in a summer swelter, The birds flew off with a fallout shelter.“ Continuing The Beatles references, McLean mentions “Helter Skelter,” which refers to one of their songs, as well as Charles Manson. Next, McLean gives up a couple of nods to the band The Byrds but mentions that their music changed for the worse in the 1960s with marijuana use potentially being a key reason. “We all got up to dance, Oh, but we never got the chance, ‘Cause the players tried to take the field, The marching band refused to yield.” Now for the sports fans, the football metaphors start coming in hot and heavy. This verse, on paper, tells a tale of a football team coming back from halftime to try and finish their game (with an injured Bob Dylan on the sidelines). The sergeants that were on the field were, again, The Beatles. The football players were anti-war protesters, but the marching band wouldn’t let them. One unanswered question is who the band represents, as it can either be police or The Beatles themselves preaching non-violence.

“Oh, and there we were, all in one place, A generation lost in space.” The culmination of this era of music was at the 1969 Woodstock Festival, which is where we start in the penultimate verse. McLean actually saw this festival as a bit of a time waster when it could’ve been used for something more useful. Around that time, The Rolling Stones became popular, with McLean’s lyrics essentially saying that they sold their souls to the devil to become famous. “And as the flames climbed high into the night, To light the sacrificial rite, I saw Satan laughing with delight, The day the music died.” In the same year as Woodstock, The Rolling Stones attempted their version of it at the Altamont Speedway in Livermore, California. It was an absolute mess, with the Hell’s Angels motorcycle gang being brought in as stage security. In McLean’s mind, the world was far removed from the likes of Buddy Holly, and corporate devils had claimed the soul of rock music as we knew it.

“I met a girl who sang the blues, And I asked her for some happy news, But she just smiled and turned away.” Finally, McLean starts to reflect toward the end of “American Pie.” It was believed that the girl ‘who sang the blues’ was Janis Joplin, who could help keep the Buddy Holly era of music alive. Sadly, she passed away from a heroin overdose in what appeared to be McLean’s last hope. With that, he returned to the ‘sacred’ record store of his youth to feel nostalgic about his childhood, but the record stores no longer had booths for him to listen to those tunes and only carried the new hits. Everything that McLean had once known was gone by this point. It wasn’t just music, either, as he felt that society as a whole was heading in the wrong direction and finally went over the cliff at the end of the 1960s. As for the final verse lyric referring to “The Father, Son, and the Holy Ghost” that’s still up for interpretation. McLean could be referencing the Bible (he was raised a devout Catholic), political figures John F. Kennedy, Robert F. Kennedy, and Martin Luther King, Jr., or the three singers who lost their lives on “the day the music died.” While we know much of the “American Pie” song’s meaning, there are still some hidden references that McLean has remained mum on for all these years. Next: Full history and meaning behind “Hallelujah” by Leonard Cohen Full meaning behind “Pumped Up Kicks” By Foster The People Best songs about food ever recorded Best songs about America ever recorded Best songs with strong figurative language usage (of all time) The staff behind Music Grotto create thorough editorial pieces from our relationships with media/music journalists and writers all over the world. We directly publish pieces written and researched by accomplished writers and our adherence to strict editorial processes ensures quality opinions and facts are expressed in all of our featured pieces.