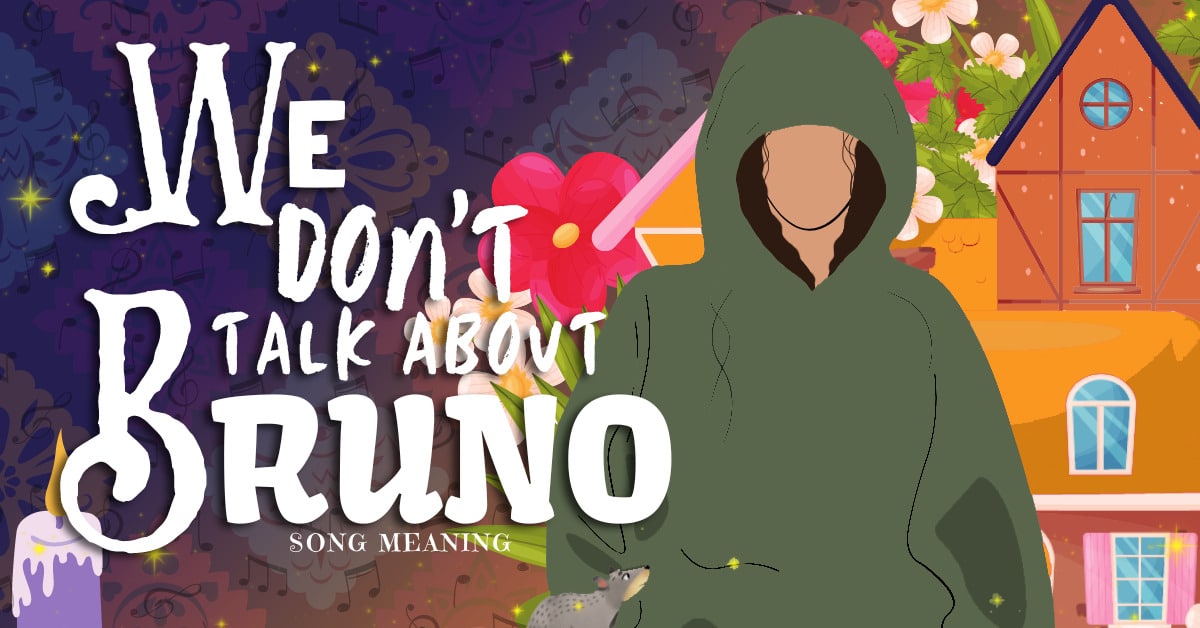 Once in a while, a song from a movie will come along and reach mainstream success. One of these songs is We Don’t Talk About Bruno, which was included in the Disney film, Encanto. Penned by Tony Award winner Lin-Manuel Miranda of Hamilton fame, this track became a cultural phenomenon. Kids around the world were singing this song, and it reached number one on the Billboard Hot 100 charts. For Disney, it was the most successful track on the charts from one of its films. What is this salsa-inspired song all about though? Let’s take a closer look at the meaning of We Don’t Talk About Bruno.

Released November 24th, 2021, Encanto left all other Disney movies in the dust.  Directed by Byron Howard and Jared Bush, the title, meaning “charm” in Spanish, takes place in a small Colombian village. It follows the wild journey of a family called The Madrigals, originally an Italian-derived word that, in English, means a “short lyrical poem.”  The Madrigals are a magical family composed of the matriarch of the family, Alma “Abuela,” Maribel, Julieta, Pepa, Félix, Agustín, Luisa, Isabela, Camilo, Antonio, Dolores, Pedro, and the infamous Bruno. All of them, aside from Maribel and Abuela, have their own set of magical powers. Abuela does, however, possess the candle she was gifted that holds all of the family’s power.   Tragic events lead up to the life the Madrigals live with their magical gifts. Abuela, her husband Pedro, and their triplets Bruno, Pepa, and Julieta were forced out of their home by violent conquerors. While Abuela and her babies escaped the massacre, Pedro did not. Lost and hopeless, the forest gives power to a candle Abuela was holding that now serves as the core of her family’s power. They also received a magical house with a mind of its own and a mountainous landscape full of beauty to protect their family and new village. Next: The best salsa songs of all time (our ultimate playlist)

Bruno Madrigal is one of Abuela and Pedro’s three children and their only son. He’s labeled as an outcast by everyone who has seen and heard about him. His gift given by the magic candle allows him to see into the future, causing quite a rift in the village and his family.   Although his predictions are quite innocent, the people around him often misconstrue his predictions and blame him for things that would have happened regardless. Poor Bruno got a bad rap and only ever tried to use his gift for good. As a result, he was ostracized by his family. He has been driven away and hasn’t been seen for years. In the movie, Maribel begins to question everything she knows about her family and the mysterious powers they possess. She goes on to ask her family members about her Uncle Bruno and the reason why the village and her family refuse to speak about him.

Why Nobody Talks About Bruno

The song starts off with Maribel’s weather-controlling Aunt Pepa as well as her Uncle Félix accusing Bruno of causing the hurricane that interrupted their wedding day, with him saying “it looks like rain” and “in doing so he floods my brain,” Pepa says. Later, it’s explained this wasn’t Bruno’s fault, and there was no prophecy. He saw his sister sweating due to the nerves of her special day, and her misconception of his words caused her to sabotage her own wedding.   Next comes Dolores’ verse. She sings in a hushed whisper, somewhat signifying her gift of being able to hear the slightest whisper miles away. She sings about Bruno in a different light than the rest.  It could be due to her knowledge that he had been living in the walls of their magical house throughout the years he was missing.  She somewhat lets on that she understands the truth about Bruno more than the others’ exaggerated interpretation of him with lines like “it’s a heavy lift with a gift so humbling, always left Abuela and the family fumbling, grappling with prophecies they couldn’t understand.” Camilo is next with his frightening and highly exaggerated description of Bruno having “a seven-foot frame, rats along his back” and that he “sees your dreams and feasts on your screams.” Making his uncle seem much more horrifying than he is in actuality. Possibly derived from a monstrous interpretation of Bruno that was formed by rumors and stories Camilo had heard about him over the years, seeing as he’s too young to have any personal memory of his uncle.   Next in the song is the people of the Madrigal’s village sharing their experiences of Bruno’s fortune telling. One explains how he said his fish would die, then “the next day, dead.”  Another saying “he told me I’d grow a gut,” with the man clearly having put on weight. And another saying “he said that all my hair would disappear, now look at my head,” the man then revealed a smooth and shiny dome underneath his toupee. Most would think these are just the harsh realities that come with life and aging, but the villagers found it easier to blame Bruno for their misfortune and tainted him even further in doing so.   The ever-so-elegant Isabela sings about Bruno next. She says he predicted great things for her, how she would have the life of her dreams and that her power would grow. At the time, she didn’t know just how much she would blossom and what kind of growth her powers would have later in the movie. Dolores chimes in with the heartbreaking lines “he told me that the man of my dreams would be just out of reach, betrothed to another.”  She’s referring to her sister Isabela’s suitor Mariano Guzmán and her secret love for him. All turns out well in the end with Isabela finding true love within herself and Dolores finally getting a shot at true love with Mariano, showing the audience that your destiny is what you make it and not always the path foretold.   Maribel ends the song with a worried tone, wishing she had never brought up Bruno in the first place. She puts together pieces of a plaque with an illustrated prophecy predicted by Bruno before his disappearance and is startled by what she sees. It depicts Maribel in front of her family’s crumbling home, alluding to the separation her family feels from the pressure of carrying the weight of their gifts.   With her family struggling, the magic candle begins to flicker and dim. In the end, Maribel’s inquisitive nature saves her family and reintroduces Bruno. She brings the family closer than ever with her unconditional love and ability to stand up to Abuela’s controlling hold on them and their gifts. Read Next: Our ultimate playlist of Disney songs The greatest Disney karaoke songs to sing Meaning behind Adele’s “Easy On Me” song lyrics Meaning behind “Blinded By The Light” by Manfred Mann’s Earth Band The staff behind Music Grotto create thorough editorial pieces from our relationships with media/music journalists and writers all over the world. We directly publish pieces written and researched by accomplished writers and our adherence to strict editorial processes ensures quality opinions and facts are expressed in all of our featured pieces.